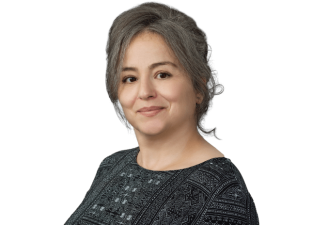 Sabrine Hassen is a managing director in K2 Integrity’s Investigations and Disputes practice in London.

Sabrine has 18 years of professional services, advisory, and industry experience, helping businesses, international organizations, and governments to identify and respond to allegations or instances of fraud, corruption, bribery, counter-terrorism financing, money laundering, and other acts of wrongdoing and misconduct in the Middle East and North Africa. Sabrine has spent significant time living and working in the MENA region and has led complex cross-border investigations in several of those jurisdictions.

Before joining K2 Integrity, Sabrine was a senior manager in the forensic services practice at PricewaterhouseCooper (PwC). During her tenure at PwC, Sabrine played a key role on a global investigation involving more than 1,000 service providers across 140 countries with an estimated $1.4 billion in potential fraudulent charges against the Libyan government.

Prior to her time at PwC, Sabrine was a senior director in Kroll International’s London office, where she worked mainly on self-due diligences and asset tracing for international law firms representing individuals and institutions from the Arabian Peninsula, and assisted several Middle Eastern sovereign wealth funds with litigation support.

Sabrine received her M.A. in Middle Eastern studies and geopolitics from Jean Moulin University in Lyon, France. She is fluent in English, French, and Arabic.